Preorder Now Available for every book in the series!
Click here → http://bit.ly/7Bridesfor7Blackthornes

Meet the Blackthorne men, each one as hot, fast, and smooth as the whiskey that built the family fortune, and yachts and race cars that bear their name. From proud Scottish stock, Blackthornes never lose. But, one by one, the seven sexy men in this family are about to risk everything when they fall for strong and beautiful women who test their mettle in life…and love. 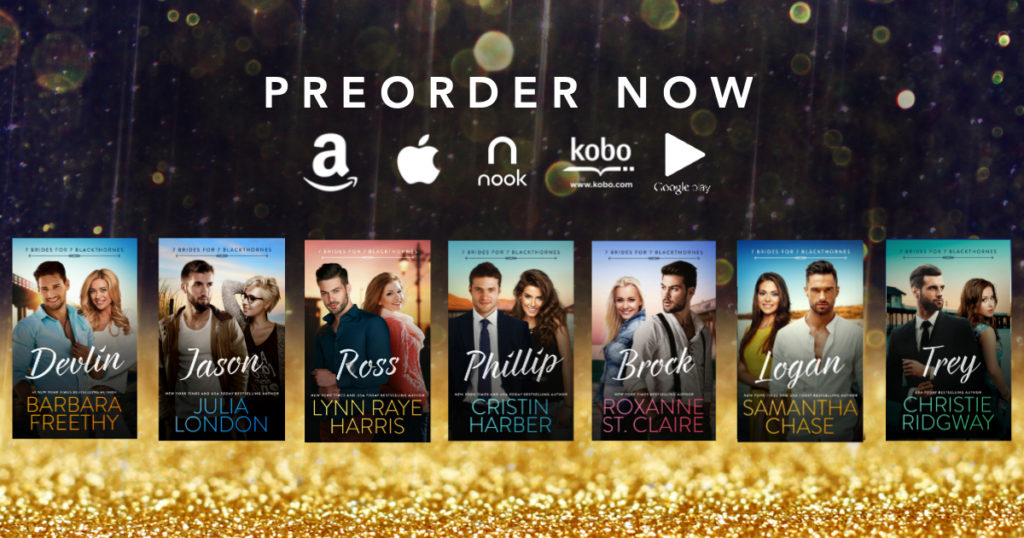 When Phillip Blackthorne secures his title as Harvard’s most mischievous co-ed with a prank that makes the campus newspaper, he also earns a spot on the prissy Miss Ashley Catherine Cartwright’s blacklist.

“You ruined my life” are the first and only words Ashley shares with Phillip until the pair collides again twelve years later, when Phillip’s runaway golf cart crashes through Ashley’s charity event.

He is certain Ashley mutters a prim and proper “I hate you,” but the rest of King Harbor hears Ashley issue him a challenge on live TV. Phillip must organize a fund-raiser to come up with the money the event had been forecasted to earn—without the help of his family’s wealth.

Have Phillip’s pranks finally gone too far? Or will Phillip and Ashley discover that laughter makes the best happily ever after? Ross Blackthorne likes his cars fast and his women faster.

Ross Blackthorne likes his cars fast and his women faster. As the third son, he’s accustomed to living his life without the pressure to succeed that his older brothers face. But when he crashes his race car during a public event, his father decides enough is enough. It’s time for Ross to step up and join the family business.

Holly Brooks has her hands full running operations at the Blackthorne Distillery in Lexington, Kentucky. The last thing she needs is to babysit an unrepentant playboy who doesn’t have any interest in learning what it takes to make world-class bourbon.
Ross only intends to stay for as long as it takes to convince his father he’s better suited to driving fast—but working in close proximity to Holly is more interesting than he expected.

Can daredevil Ross convince good girl Holly that he’s worth the risk? Or is their budding relationship doomed to crash and burn? Sparks fly when the cameras are off...
Jason by Julia London releases on August 8th!

Jason Blackthorne wants to make films.  As head of Blackthorne Entertainment, he’s finally getting his break – a gritty cop drama filmed near the family compound. He has a lot riding on the success of the series, both with family and the industry.  He doesn’t have time to notice how pretty or talented his assistant is. He just needs her to jump when he says jump.

Mallory Price has tried acting, but what she really wants is to be behind the camera. She is a storyteller at heart and she knows she could direct a killer show.  She has great ideas, and though Jason seems to hear her, he never sees her as anything but a Girl Friday.

But when an accident on set puts him flat on his back, and a mercurial director goes missing, Mallory steps in.  Long nights at work and equal footing create sparks between Jason and Mallory.  But when Jason is on his feet once again, and the director returns, has anything really changed between them?  Or was it all just a dream? Winning her heart may be biggest prize of all...
Devlin by Barbara Freethy releases on August 1st!

As the second Blackthorne son, Devlin usually likes to stay out of the family drama, but with his family suddenly falling apart, he has one way to bring them back together. He wants to win the Southern Maine Sailing Invitational, like his father and uncle before him. He has built the fastest boat, he has planned for every contingency, except one…a beautiful blonde determined to beat him and avenge a family betrayal.

Hannah Reid is tired of watching the Blackthornes win races on boats built by her dad, especially after the family patriarch fired her father. She has only one way to get revenge, win the race. Unfortunately, Devlin Blackthorne is standing in her way. She wants to hate him, but Devlin’s love of the sea and brave, adventurous spirit mirrors her own, and she begins to realize that this sexy, charming man is hurting, too.

As they race to the finish, battling not only betrayal, but also strong winds and unexpected storms, Hannah and Devlin wonder if winning each other wouldn’t be the greatest win of all…