The Arkadian Brides Agency is about to send Hailey to paradise.


Hailey always thought she was a member of the noble poor in Arkadia’s underworld. Her family’s farm might be struggling, but as the designated produce runner, she is reminded how lucky she is every time she brings donations to the village children’s home. But when Hailey learns that the family business isn’t what it seems, she knows she has to get away fast. The only option is the unthinkable – sell herself off as a bride to a wealthy man in the overworld to buy her family out of danger.

Orion follows the rules. It’s the only option if he wants to be elected the King’s ambassador. But when a single night of fun in the Outer Rings lands him with an unexpected heir on his doorstep, Orion must take action, and fast. Since the little one’s biological mother can’t be found, he opts to sponsor a bride from the underworld. His daughter will not be made to grow up without a mother figure. And after all, a permanent tie to Arkadia’s working class underworld could gain him essential votes. But he is determined to honor his new bride with his name and fortune, without imposing himself on her romantically.

The unlikely couple might be planning a marriage of convenience, but their shared love of little Opal brings them inexorably closer each day. When Hailey’s past threatens to catch up with her, they will be forced to face their true feelings. Will Orion sacrifice his career for love? Or will Hailey go on the run again before he gets a chance?


If you like strong women, hunky aliens, wild adventures, steamy sensual scenes, and happily-ever-afters, then you’ll love the world of Arkadia: Is your heart ready to be unleashed?
Don't miss your chance to set it free and preorder a copy of the Hearts Unleashed Anthology for only 99¢! Unleash your heart, indulge your senses, and satisfy your cravings with this fantastic collection of supernatural fiction featuring sensual heroes and sassy heroines, crafted by some of your favorite bestselling and award-winning authors. https://geni.us/Sithe
Available on All Platforms
It’s a routine mission. Hunt down the ones who dared – dared – steal our sacred procreation metal from us, the rulers of the empire.
The Arrisans conquered Earth in a day. They smashed into our helpless planet like a wrecking ball, and overnight, everything changed.
That’s what our history books say.
The truth is, I’ve never seen an Arrisan face-to-face. But when my lone medical ship is attacked by ruthless pirates, the nightmare that hunts them down is no hero.
Cloaked in assassin’s gray, metal scythes fused to his wrist-bones, he is the grim reaper of the conquerors. The Arrisan elite special forces. A blade.
Luckily for me, he’s in a good mood now that he’s the last man standing in the blood-soaked ruins of my bridge, so he lets me live. After all, I’m just a lesser. Clearly I’m no threat.
Until his body starts reacting to mine...

*** From the author of the Lords of Atlantis and Onyx Dragons comes a dazzling new series full of unique alien shifters, fierce passion, and loyal warriors who find their fated mates in the stars. Each full-length book is a complete romance with an epic happily-ever-after. Claim your conqueror today! I’ve gone too far this time.

The man stands and twitches his gray suit, resettling it over his broad, all-too-human back, tapered waist, muscular quads and calves. The cowl has fallen back, revealing black hair and pallid skin, and he pads silently across the blood-soaked carpet on gray boots. The black lining his fingernails could just be polish, the spikes on the backs of his ears a quirk of biology.

But the molecule-thin blades nested like a chevron tattoo at his wrists prove he is the deadliest member of the conquering race. A foot soldier, known as a blade, from the conquerors of Arris.

Why, if the Arrisans have huge lasers that can devastate planets, do they arm and train their foot soldiers to win a war single-handedly? Old joke. Because every part of Arris is terrifying.

And I have just sexually assaulted him.

I have assaulted him in the ship’s theater where we used to spread blankets and eat popcorn and pretend we were still on Humana, in a big science experiment together, one that would be over soon.

He presses the communication button.

The movie screen activates, and another brutal, pallid Arrisan fills the half dome. He leers over me.

Terror jolts into my bones. I scramble around the back of the captain’s chair.

“Spiderwasp in,” he barks. “We acknowledge your priority call. Intercept in two clegs. Prepare for the majesty of the High Command’s newest flagship, blade. Spiderwasp out.”

As do the ribbons of flesh beneath my bare feet.

I am crouched in someone’s entrails.

Silence cuts my ears with its sharpness. The stench of burnt oxygen and sour waste pierces my nostrils. The world fractures around me like peering through broken glass. Too sharp, too real.

The foot soldier replaces his hood and turns.

His face is barely profiled in the cloaking shadow of the assassin’s cowl. The suit moves like a normal cloak, but a sheen of black underneath deflects light like spilled oil. He flexes his fingers. The curved blades emerge a fraction from his wrists. He fixes on me.

I scoot around the captain’s chair, trying to make myself small.

“What did the Eruvisans do to you?”

His voice is toneless and quiet.

I want to look away, but I can’t in case that’s how I miss when I die. “Nothing. Everything. I don’t remember.”

The shadows where his eyes should be widen slightly. He thinks I’m tricking him. Like I would even know how. https://geni.us/AtlasTB
Get it on All Platforms
It was supposed to be a simple arrangement…

When Valerie’s designated match from the Arkadia Brides Agency offers her a deal that involves a quick marriage and divorce, she can’t believe her good luck. She can realize her dream of opening a tea shop, and without a pesky husband around she can send for her beloved sisters to join her. But as soon as she meets the blue-eyed giant who wants her to pretend to be in love with him, she is instantly, annoyingly attracted to him.

Atlas lives a quiet life of leisure. His only problem is a caveat in his grandfather’s will that means he will lose the family estate if he isn’t married by the age of thirty. So, he offers his match an arrangement - he gets his inheritance, and she gets a cut of the money to open her tea shop. Nobody falls in love, and nobody gets hurt. He just doesn’t expect his pretend bride to trigger an inescapable hurricane of lust and longing in him.

When a rival family member shows up and starts questioning their relationship, Valerie and Atlas suddenly find themselves a whole lot closer than they planned.

They’re convinced they’re putting on a show to fool everyone else, but it seems more and more like the only people they are fooling are themselves.

If you like strong women, hunky aliens, wild adventures, steamy sensual scenes, and happily-ever-afters, then you’ll love the world of Arkadia: BLURB:
As life happens, happily-ever-after gets harder to hold on to...

Two kids and two busy careers have taken their toll on Jax and Esther Johnson. Muddling through the middle of their lives, this Daddy Dom and his sweet and sassy babygirl have been in a rut for a long time. Esther knows motherhood and age have changed her body, and she's never been the sophisticated type that her husband spends time with all day at work. Worried that Jax is moving on to younger, greener pastures, Esther begins a campaign to win back her husband.

There's just one problem: when Jax notices his wife is no longer acting like herself, he begins to assume the worst. About the Author:
Golden Angel is a USA Today best-selling author, Amazon Top 50 bestselling author, and self-described bibliophile with a "kinky" bent who loves to write stories for the characters in her head. If she didn't get them out, she's pretty sure she'd go just a little crazy.

She is happily married, old enough to know better but still too young to care, and a big fan of happily-ever-afters, strong heroes and heroines, and sizzling chemistry. 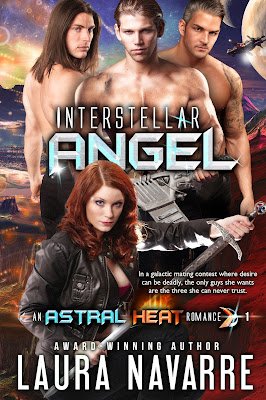 https://geni.us/InterstellarAngel
Get it on All Platforms
In a galactic mating contest where desire can be deadly, the only guys she wants are the three she can never trust.

In a faraway galaxy on the edge of apocalypse, cyber samurai Kaia of Kryll is the daughter of a tyrant who’s worshipped as a god by billions. A prison sentence she’ll kill to escape, since women like Kaia are worshipped in chains. And she’s just become the prize five hundred testosterone-fueled suitors will lie, seduce, and slaughter to possess in a ritual contest for her bed.

In the scramble to slip past her samurai defenses into her cybersuit, the only guys she wants are the three she can never trust. These four have a boatload of shared secrets and a shared passion so combustible it’s practically pyrophoric—breaking every dangerous rule on a world where lovers are crucified for unconventional unions. Their illicit heat will either end the war destroying all their races…

Or get the four of them killed when a god unleashes a death warrant for their heads.

Interstellar Angel is an epic, hyper-sexy, reverse harem space opera/sci fi romance and your gateway to the Astral Heat universe, where Star Wars meets 50 Shades by way of The Hunger Games. Laura Navarre delivers turbocharged outer space action with a fearless heroine, a cliffhanger series that ends with a guaranteed happily-ever-after, and a whole lot of heat.

Discover Interstellar Angel and blast off to adventure today!