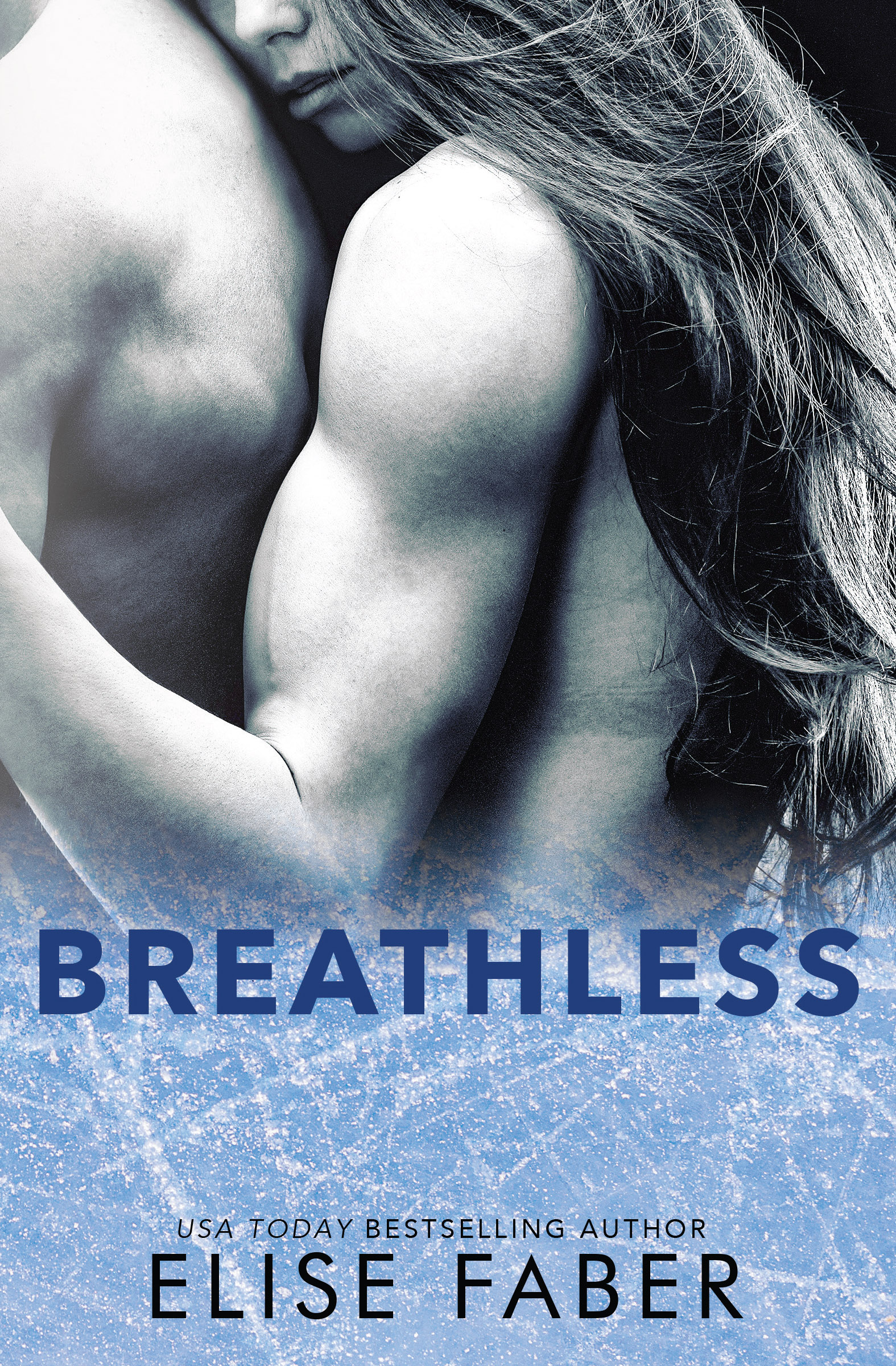 https://geni.us/BreathlessEF
Preorder On All Platforms
Professional hockey players weren’t supposed to get their hearts broken.

But that’s precisely what happened to Marcel Aubert, forward for the Breakers. He’d fallen hard for his ex, and then she’d cheated on him with a truly reprehensible teammate.

Because she’d been bored. Of him. Not life. She’d made that fact crystal clear.

So Marcel had moved on . . . if remaining single and losing himself in books when he wasn’t on the ice was moving on.

Until he met Prudence Hansley. She was, quite literally, the most imprudent person he’d ever had the privilege of knowing. A total daredevil, she’d jumped out of planes, had hiked into a volcano, spent time in a shark cage.

And wonderful. And somehow, she liked him. Boring Marcel.

But when she dared him to take another chance on love, would he find the courage to leap?
REVIEW: BREATHLESS (BREAKERS HOCKEY) BY ELISE FABER


Breathless pulls the heart in a surprising direction and hits pay dirt. Faber tells Marcel and Prudence story from a male's POV. The thoughts of a man prove to be an eye opening experience. So speaks the heart and touches the soul. USA Today bestselling author, Elise Faber, loves chocolate, Star Wars, Harry Potter, and hockey (the order depending on the day and how well her team—the Sharks!—are playing). She and her husband also play as much hockey as they can squeeze into their schedules, so much so that their typical date night is spent on the ice. Elise changes her hair color more often than some people change their socks, loves sparkly things, and is the mom to two exuberant boys.

She lives in Northern California. Connect with her in her Facebook group, the Fabinators or email her at elisefaberauthor@gmail.com. I’m basically American royalty-- daughter to a former Senator and heiress to a fortune.

And princesses marry princes. My father has arranged for me to marry his best friend’s son without my knowledge. Now I’m engaged to someone I don’t even know-- a man who was supposed to be my sister’s husband.

I know what’s expected of me. Unfortunately, this princess has fallen for a pauper.

Colton Fisher is a single dad struggling to get by. He runs an art studio and works as a tattoo artist at one of the local shops. Before I know what’s happening, love between us has ignited, and I’m consumed by the flames.

Except that inferno between us has caught fire, and now I’m carrying Colton’s baby.

Pregnant by one man and engaged to another, I’m caught between pleasing the family who raised me and being with my soulmate.

I have a choice-- the perfect life, or the perfect love. If I don’t make the right decision, I might end up getting burned. Chasing Fire is a contemporary romance novel that features fiery situations and passionate encounters. This single dad surprise baby romance has all the feel-good moments that readers are looking for. A Counterfeit Suitor by Darcie Wilde is now live https://geni.us/ACounterfeitSuitor
Available on All Platforms
“Wilde's heroine is not only a useful woman but a highly entertaining one.”
—Kirkus Reviews on And Dangerous to Know

Among the ton of Regency London, one breath of scandal can be disastrous. Enter Rosalind Thorne, a young woman adept at helping ladies of quality navigate the most delicate problems—in this charming mystery series inspired by the novels of Jane Austen . . .

It is every mama’s dearest wish that her daughter marries well. But how to ensure that a seemingly earnest suitor is not merely a fortune hunter? Rosalind is involved in just such a case, discreetly investigating a client’s prospective son-in-law, when she is drawn into another predicament shockingly close to home.

Rosalind’s estranged father, Sir Reginald Thorne—a drunkard and forger—has fallen into the hands of the vicious scoundrel Russell Fullerton. Angered by her interference in his blackmail schemes, Fullerton intends to unleash Sir Reginald on society and ruin Rosalind. Before Rosalind’s enemy can act, Sir Reginald is found murdered—and Fullerton is arrested for the crime. He protests his innocence, and Rosalind reluctantly agrees to uncover the truth, suspecting that this mystery may be linked to her other, ongoing cases.

Aided by her sister, Charlotte, and sundry friends and associates—including handsome Bow Street Runner Adam Harkness—Rosalind sets to work. But with political espionage and Napoleon loyalists in the mix, there may be more sinister motives, and far higher stakes, than she ever imagined . . .
@darciewildeauthor Darcie Wilde is the author of the Regency Makeover Trilogy of eNovellas as well as A Useful Woman, the first novel in a Regency-set historical mystery series inspired by the novels of Jane Austen. Her book Lord of the Rakes was a 2014 Romantic Times nominee for Best First Historical Romance.

Visit her online at darciewilderomance.com. https://geni.us/Zyon
Get it on All Platforms
She longs to win a place in her new community. He only wants to win her heart.

Kora competed as a professional athlete until a tragic injury ended her career. But the opportunity to adopt a baby and tame a wild frontier moon electrifies her adventurous spirit, and the moment she lays eyes on adorable baby Pax, she is convinced that everything in her life happened for a reason. But when the child’s maddeningly handsome guard tells her he’s staying with them for good, she starts to wonder what she’s gotten herself into.

Zyon is a brave Invicta dragon warrior, fully committed to protecting his tiny Imberian charge, no matter what. When the child’s adoptive mother sends the dragon inside him into a frenzy of desire, he’s not sure what to think. Surely a dragon can’t choose a Terran for his mate.

Kora is already worried about fitting in among the residents of the glamourous dome town of Cupola Cove. When Zyon makes a decision that causes tension within the community, the two find themselves back out on the dangerous ice plains in a race against time to make things right.

Will the big dragon prove himself to Kora? Or will they both be left out in the cold?

Join the Alien Adoption Agency for an amazing adventure on the brand-new moon of Atropos!

If you like strong women, hunky aliens, wild adventures, steamy sensual scenes, and happily-ever-afters, then you’ll love the world of Stargazer! https://geni.us/GaiasOath
Preorder Available Now
How do you hide your powers and pretend to be human when your anger alone makes the windows freeze over?

Thousands of years ago when humans still lived in caves, Gaia took an oath to keep humans connected to nature. At the time it seemed like an easy promise to make but much has changed. Desperate to get humans back on track, Gaia goes down to earth and enrolls at a Scottish boarding school where four old souls have the potential to become historical change-makers.

How will Gaia react when one of them turns out to be a soulmate from a previous life with whom she has unfinished business? Can she steady her heart and keep her focus? If she doesn’t get these four flawed human beings to step up and share their talents, will she run out of what little patience she has left and accidentally unleash another Ice Age?

Gaia’s Oath is the second installment in the thought-provoking trilogy called Ancient Souls. It’s written by Elin Peer and Pearl Beacon, the mother/daughter team behind several best-selling series such as Men of the North and Clashing Colors.

Get your copy in pre-sale today.