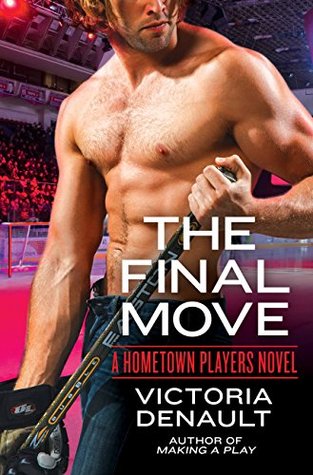 Hockey legend Devin Garrison thought he blew his shot. But his relationship with Callie Caplan just went into overtime.

Sexy, rich, and one of the biggest stars in the NHL, Devin Garrison has always been the one who had it all. That is until his marriage falls apart and he realizes he has to start over. If he's honest, there has only been one woman who ever really excited him-Callie Caplan. They shared a night that was hotter than the late-summer sun, but in an instant-Callie was gone, pretending it never happened.

Callie Caplan isn't the wild child people think she is. It's true she's avoided relationships, but only because she's seen how crazy love can be. And her messy, imperfect life is crazy enough without opening her heart to a man-even one as picture perfect as Devin. But when fate brings them back together-just as they need each other most-Devin is determined to convince Callie that what she's feeling is real. And this final play may be their chance at forever . . .

The Final Move by Victoria Denault


Victoria Denault takes a complicated relationship and creates a story of shelter, heartbreak and true love. I was first introduced into this world of hot men and the women who love them through Making a Play. I am not a hockey fan and that was almost a draw back for me but the concept of the story was so amazing I was caught up in it all. Ms. Denault creates a world full of characters that are big names in the sport of hockey but when needed know they can return to the place that started it all. Home. The understanding and experiences gained in the most vulnerable of places helps center these strong men and along the way leads to a little self-discovery and healing. These books are love stories but they are also inspiring life lessons. I received an ARC of The Final Move by Victoria Denault in exchange for an honest review.