COMING SOON: FIGHTING DIRTY (WORTH THE FIGHT #5) BY SIDNEY HALSTON. 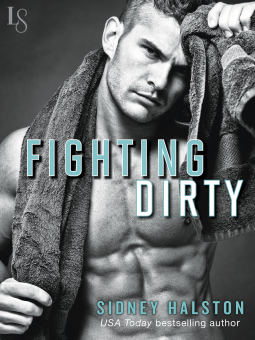 FIGHTING DIRTY (WORTH THE FIGHT #5) BY SIDNEY HALSTON

If you love the MMA romances of Vi Kreeland and Kendall Ryan, Sidney Halston’s Worth the Fight series will knock your socks off! In Fighting Dirty, a geek-chic cage fighter proves that appearances can be deceiving . . . and oh-so-tempting.

With his preppy clothes and horn-rimmed glasses, Enzo Silva is the last dude anyone expects to find in a mixed martial arts gym. A wealthy Brazilian banker who never had to fight for anything, Enzo’s stuck in the amateur circuit—but he burns to make the pros. Maybe that explains the heat he feels whenever he’s around Jamie Lynn Calhoun. The pint-size, magenta-haired bartender with the Texas drawl is everything he’s not . . . and everything he craves.

Tough as nails and independent to a fault, Jamie Lynn—JL to her friends—works hard to pay her bills and keep life simple. Enzo is doing his best to complicate that. Even though she likes to bust his balls, he’s got some kind of a nerdy-hot vibe that makes JL wonder if she might finally be able to let her guard down. It might do the boy some good to spend some time in her world, where blood, sweat, and victory are as sweet as the first taste of real love.

REVIEW:  FIGHTING DIRTY (WORTH THE FIGHT #5) BY SIDNEY HALSTON


The difference between living and existing is up to you. That is the central theme of Sidney Halston's latest novel Fighting Dirty. It also is the point that JL (Jamie Lynn) helps Enzo (Lorenzo) to discover. His happiness rests on himself and not trying to please others. Jamie Lynn is a survivor. Her life is the true testament to the saying of making lemonade out of lemons. Becoming her own person and coming to terms with the anger, heartbreak and tragedy have created a woman with thick skin that looks for the bright side but has endured life's darkest moments. Lorenzo has wealth but is not happy and his fortune has become a noose he wears daily. Sidney Halston via her Worth the Fight series has penned stories that are full of beauty, bravery and characters that capture the imagination and heart. I received an ARC of Fighting Dirty in exchange for an honest review.