Only one week left until the release of 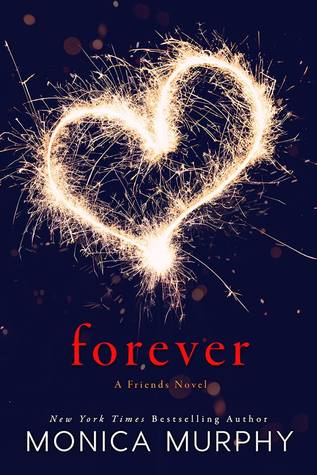 She’s all I could ever want…

I have a reputation around school. Cold. Untouchable. Unfeeling. Only one girl could ever make me want to change and that’s Amanda Winters. Too bad I broke her heart and drove her away.

So to get through the rest of my days in high school, I tell myself I need to focus on more important things. Like taking our football team to championships. Get accepted to the college of my choice. And finish my senior year without wanting to run away from my problems.

But your problems chase after you no matter where you go. And it’s a lot harder when you fight them alone. The longer I go without Amanda, the more I miss her. Her smile. Her laughter. The things she said. How she looked at me like I was the only person who mattered. The way she made me feel…

Why can’t I have everything, including the girl? I’m determined to make things right. And make Amanda mine…

Amanda and Jordan have had a rocky road. Ms. Murphy hits readers with dueling first person points of views. More than Friends supplied Amanda's side. Her feelings of inadequacy and the trail of tears that litters her love life were put on full display. Forever, lets readers into Jordan's head. His fear of failure, his hopes and dreams and the war his heart wages. Sports are his strength but Amanda is his heart's desire. Will he allow fear to cost him everything?

Tuttle is going to be the end of me. ​Kissing her would never be enough for me. ​ ​Did she love me enough to forgive me? ​ Tuttle was every girl's dream. And all I wanted was for him to be my reality. CATCH UP WITH THE FRIEND SERIES! 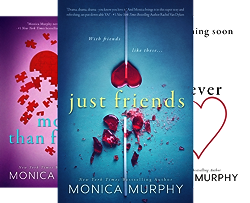 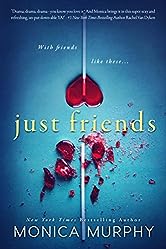 "Drama, drama, drama - you know you love it! And Monica brings it in this super sexy and refreshing, un-put-down-able YA!!" Rachel Van Dyken, #1 New York Times Bestselling Author

It’s the end of summer. Just before I start senior year with my two best friends in the whole world. Dustin and Emily are everything to me. We’ve been inseparable since middle school, and when we’re together, nothing can go wrong.

But things aren’t always what they seem. Em’s turned into a drunken mess who parties too much. Dustin and I have hooked up a few times—and now he’s ready to take our relationship to the next level. Yet I’m not sure I want things to change. I’m scared if I take it any further with Dustin, our friendship will be ruined forever. Then there’s Ryan. The new guy. He’s hot. He flirts way too much. And Em has totally set her sights on him.

So when my best friend betrays me in the worst possible way, guess who’s there to help me pick up the pieces of my broken heart? Ryan. But he’s so confusing. Annoying. Sweet. Sexy. I want to trust him, yet he makes it so hard. What I really want is for everything to go back to the way it was before.

Before I found out that best friends make the worst kind of enemies. 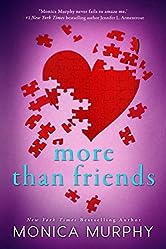 I’m your average girl at your average high school, trying to figure out my place in life. After catching my now ex-boyfriend messing around with my now ex-best friend, I’ve made some big changes. No more band, no more backstabbing friends and no more boring old life. Now I have new friends, a new job and new interests.

But there’s a certain someone who’s interested in me, and I don’t get it. Jordan Tuttle could have anyone he wants. He’s the most popular boy in school. Rich, gorgeous, smart and the star quarterback, he’s perfect. Yet he acts like he wants no one else but…me.

So despite my fears and doubt, I let him get close. Probably too close. I discover that he’s not so perfect after all, but it doesn’t matter. I’m falling for him, even though he runs so hot and cold. I know someday he’s going to break my heart.

And I’m going to let him.

More Than Friends by Monica Murphy


More Than Friends began my introduction to the Friends series and although, I came late to the party, it was an interesting time get to know Jordan and Amanda. He's the guy that seems to have it all. A promising future, popularity and the smarts and skills to back up his life on easy street. Amanda is the girl that's dealt with some hard breaks. Cheating boyfriends, two - faced best friends and self - confidence issues. When the star quarterback sets his sights on the average beauty things are looking up, but secrets and insecurities, may derail this budding romance before it's even begun. Teen angst and adult drama took me back to high school.